Let's prevent disease instead of curing it. 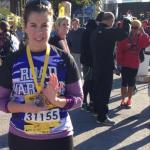 My “healthier me” transformation started in June of 2003. I was at my heaviest of 196 lbs. and, my now husband Ron, proposed to me while we were on a Mediterranean cruise. My world was about to change. Not only were we getting married in a year, we were also moving across the world from Germany to California. Yes I was on that path to become a military spouse…I go where he goes.  Germany was an awesome 5 year experience. The culture was enriching, the travel was a blast, the beer was tasty and of course the food was outstanding. I was living life. I drank the beer I wanted to drink and I ate the food I wanted to eat. The problem was I was eating to get full every time I ate. I felt uncomfortable after every meal.  Exercise was minimal so no wonder I packed on the lbs. without really noticing!

I attempted multiple times while we were in Germany to train to run. No luck. My asthma was my perfect excuse. “I can’t breathe; where’s my inhaler,” or “I look stupid running 100 yds. and completely out of breath”. But now I have a wedding dress to buy!  And those of us who have wedding dress shopped know that the dress sizes are two full sizes above the standard women’s clothing sizes… {gulp}. A size 18 it is then, because I found the perfect dress (9 months before the wedding). So the dress is bought, and did you read that I said it was a {gulp} size 18? Well that was just the reality check I needed. Even if it was from an inflated wedding dress size (by two whole sizes I tell you)!

In California, I began walking 2 miles a day and I would hit the base gym to do weights and I attempted running again and I hated it! But I didn’t really give too much of a true effort towards it.  I would run a 1/4 mile and walk a 1/4 mile. I was embarrassed by it, but my husband was proud of me! Ron and I also changed our eating habits. We still ate the types of foods that we wanted we just ate much smaller portions.  I lost 22 lbs. in that year. The day I married my husband I weighed myself at 174lbs.  Yes, if you were wondering, I did have to have my wedding dress altered down in size. I guess the combination of diet and exercise really did work. It’s funny reflecting back. 22 lbs. is a lot but it still wasn’t enough! 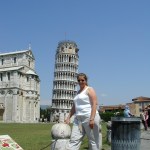 Then came sweet easy going baby #1.  I bounced back to pre-pregnancy weight quickly! Then 3 years later stubborn cranky baby #2 was born quickly followed by another move across the country (thank you Uncle Sam- no REALLY- Thank You!) to Illinois.  After baby #2, I was back up to 181 lbs. I stayed there for a little while… I’d lose a few and then gain them back. I was in baby isolation mode. I didn’t want to exercise. I’m tired. Cranky baby #2’s not sleeping. I want a glass of wine (Darn it…I’m nursing).  I didn’t care about how I looked or felt.

And then I met my doppelgänger, Summer! A doppelgänger in so many ways.  We are physically built very similar with the heavier muscular build. We’ve come to find out over the last several years that our personalities are quite similar too! God knew what he was doing when he paired up our daughters in preschool.  Over the first few years of our friendship we would meet at the YMCA and workout with our friends Heather and Amanda. We did the treadmill, the elliptical, we would circuit train, I would attempt to hang while they ran on the treadmill… Yeah attempt is the keyword there. I stayed really consistent with working out over a 3 year period. And I was consistently plateaued at around 175lbs.  In April of 2012 I was introduced to Advocare by my friend Nicole. I decided that I would try their 24 day challenge. I actually enjoyed that healthy eating and exercise challenge with a bit of supplementation. I stayed very focused on that program and I lost 11 lbs. and 11 inches.
But wait! The true transformation for me was still yet to come.  Back to my friend Summer, who one day nonchalantly said to me that we were running The Color Run in August 2012 in St Louis, Missouri. She never even gave me the chance to fight it. I was ordered. I now know that she needed me to run it just as much as I needed her to run it with me! So I trained. I followed the Zen Labs Couch to 5k eight week training program. I committed my money to this race. Now I just needed to commit my muscles and my will power.

Week 1, 2 and 3 were fairly easy and I was ecstatic at my progress. I could actually run longer than a 1/4 mile and I could actually control my breathing while doing it. This was major mental and physical progress. And then weeks 4, 5 and 6.  They were very challenging. I was running in my hilly neighborhood and I found that counting stops signs was a great way to achieve visual milestones.  Weeks 7 and 8 finally…but how brutal!  August 18th 2012 I ran my first ever 5k at the The Color Run, and of course I couldn’t have done it without Summer and a hung-over husband (that’s a whole other story) right next to me!  And yes~ I did meet my goal of running the whole thing!

Somehow in all of this training 3 miles became doable. So maybe, just maybe, a 10k could be doable?!?  I still wasn’t convinced! I signed up for another 5k run in September of 2012. A run to benefit a fallen US Air Force airman at The Bradley R Smith Memorial 5k. I met up a few friends and a few of my husband’s work friends at this race.  This is where I was introduced to Brian Trout, the founder of the Road Warriors. The Road Warriors are a local free running chapter that consists of military affiliated members who feel that an active life is the best life. There are nearly 1500 members worldwide and are characterized by purple camouflage running gear. It is amazing the camaraderie, support, advice, motivation, and compassion one can get from an actively engaged fitness organization like the Road Warriors.

That run also created a unique motivational friendship between me and my husband’s friend Tom. It became a daily check in between him & I. We would report to each other what workout we accomplished that day. Summer and Tom both worked on me simultaneously to get me to commit to a 10k. After proudly watching Ron and Tom complete the St. Louis Rock N Roll Half Marathon I committed to a 10k at McKendree University in March of 2013. I quickly downloaded the Zen Labs 10k trainer app. I dragged out the training. Actually, I essentially stopped through the Holidays of 2012. But once the New Year hit I was back on that road again in full up training mode.

Training progressed well until I got to 4-4.5 miles when I started to have a lot of pain in my feet. I was already wearing custom orthotics but the podiatrist put me into custom metatarsal pad orthotics to try and get my forefeet to spread out more. Training resumed and I was committed to run that 10k even if I was in pain. I ran a 5k about 2 weeks before the 10k.  It was only 3.1 miles and I did well, so I knew I was ready for the big day! So came the day of the 10k race.  I was pumped up! My daughters were really pumped up for me too!  My first Road Warriors group photo was taken that day!  And yes, yes I did run the whole race!  I was uncomfortable for the last half mile of the race. But I did it! I ran 6.2 miles in 1:15. And my 8 min/mile pace husband stuck with me the entire time! 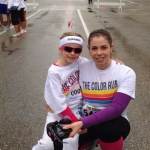 A month later I ran St Louis’ The Color Run with my 7 year old daughter Madie. We ran 1km, walked 1km and stuck with that interval until the finish line! It was quite a challenge for her! But I was so proud of her! In all these races I had gathered T-shirts, bags, sweatbands, and photographs capturing milestones achieved, but you know what I was missing? I was missing a runner’s medal. I was envious of my husband’s half marathon medal! So I signed up and trained for the St. Louis Rock N Roll Half Marathon relay with Summer in October of 2013. There I earned my FIRST finishers medal after completing a ¼ marathon.  Running for chocolate sounded like an enjoyable race. So next I ran the St Louis Hot Chocolate run in 17 degree weather. It was so cold that my chocolate fondue (the finisher’s prize) froze solid!   It was ok though, I microwaved it when I got home and let my daughters enjoy it with me.  Totally worth the wait!

In all of this I essentially discounted all hints that I should train to run a half marathon. That’s not for me! But On December 16th 2013, (I don’t know what I was thinking) I made a public commitment to myself, to Ron, to Summer, to Tom, and to the Road Warriors  that I will train to run/walk the Missouri Cowbell Half Marathon in October of 2014. I will officially start run/walk training in April 2014. My husband has agreed to run this one with me too.

In 1.5 years, I tracked over 375 miles and participated in 8 races.  I did lose a little weight during this time but the true transformation was in my body’s shape. I’d slimmed down the inches, just did not achieve the weight loss I was hoping for. Yes, I do understand the reason behind that is that I’ve lost fat and gained muscle.  I am now at a point where my weight hovers right around the low 160’s and I am comfortably a women’s size 10.  I am happy with how far I’ve come with a total loss of 35 lbs.  I have my first race medal hanging from my bathroom mirror as a tangible daily reminder of how far I’ve come.   But I’m pretty sure that there is more physical transformation in my near future training for the Missouri Cowbell Half Marathon.   I just need to make small attainable goals, adjust that little voice in my head and work hard to meet those goals. I am blessed with the perfect support team right beside me to help me do just that!

Copyright © 2022 Your Name. All rights reserved.